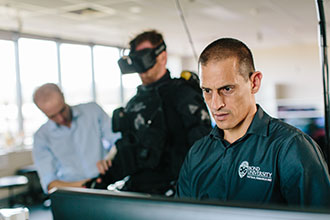 I have served in the Australian Army in a full time capacity for 23 years as an infantry soldier and Defence Force Physical Training Instructor (PTI, uniformed physiotherapist and Human Performance Officer). During this time my fields of research have included physical conditioning and injury prevention for military personnel, from the initial trainee to the elite warrior, with a key focus on combat load carriage. Serving as the Human Performance Officer for the Royal Military College and Special Operations units before joining the team at Bond University in 2012, I continue to serve in the Army Reserve as a Human Performance Officer and as a sessional presenter.

Still generally focussing on the tactical population, I am currently actively involved in research with the Australian and foreign defence forces, several police departments (both national and international), and firefighters. This research is focussed on optimising the conditioning and performance of tactical personnel while minimising injuries.

I am also investigating means of enhancing the lethality and mobility of tactical personnel required to carry loads, and the recovery pathways of personnel who have been wounded or injured.

Potential students interested in, or who are currently working with, tactical populations (military, police and firefighters) may find some of the projects on offer to their liking.

Projects include the training and rehabilitation of recruits and serving personnel, optimising selection processes for specialist streams, improving rehabilitation of injured members for return to work and investigating the impact of load carriage on occupational task performances (like mobility and lethality).

Some current projects include:

The different types of fitness testing in law enforcement

Academy graduation and the physical fitness of police recruits

Medicine and science in sports (Journal)

What does the future of apparel look like for our war fighters?

A biomechanical analysis of the BMX SX gate start.