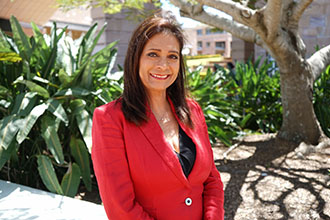 I have a background in education through teaching Latin Languages, especially French and Spanish, in Australia, France and Spain. I was an examiner for the British Association Examiners Board in Marbella, Spain. During my eight years in Spain, I had industrial experience in business, law, banking and the building industry using extensively my skills in Interpreting and Translation.

This is my 28th year at Bond University. My areas of expertise are in Intercultural Communication, French and Spanish Language. I have coordinated the European languages since 1991.

I am on the selection committee for the candidates who apply for an Internship at Austrade, in Paris.

I have published 7 books since 2007, the fourth, fith and seventh, co-edited with Australian and International authors. The seventh co-edited volume was released in May, 2019.

Extra curricular activities include interpreting and translating for Law firms on the Gold Coast, as well as being an official interpreter with Migrant Services.

Coco Through the Looking Glass

Women, children and war: The experience of intimate partners and their offspring with traumatized men

A loving triumph over the ravages of war